Inevitably my diary keeping during lockdown became a little repetitive hence I’ve not posted anything for the last twenty eight days! I wasn’t sure that the revelation that I had converted all my family to to eating quiche was all that interesting. Or that my return to buying full-fat mayonnaise rather than the ‘light’ version has been welcomed in our home like the return of the prodigal son. Who knew I was imposing lock down on high fat products and that it has taken a pandemic to make me realise they should be released for our sanity if not our waistline.

What I can tell you is that my schedule in the last four weeks has been largely shaped by shopping. What day to go, who needs what and how to avoid the queues but still get essential items. In early April I was queueing regularly for 20-30 mins in humourless lines where people were frightened to engage at all, even in our beloved British banter. I decided enough was enough when half way into such a queue I was called by my mother to make a dash to collect a prescription from the doctors before it closed. I was in such a flap I forgot my Dad’s name (he’s always been called by his middle name but all official paperwork uses his first name). I decided supermarket queuing was no longer for me so now I go at insociable hours like 7 in the morning or 7 at night. If they have no lettuce…well so be it. Life’s too short to be upset by a lack of lettuce.

We did have some drama three weeks ago. My son suddenly suffered severe abdominal pains. Of course these started in the evening. Why does everyone always start to get sick in the evening? By 10pm we were on the phone to 111 and decided with them to monitor overnight. After a sleepless night and two projectile vomiting incidents we were on the phone again the next morning. I’m still regretting my decision to look for a bowl for my son to throw up in as he stood wretching in his bedroom, rather than hustle him to the bathroom a few feet away. A favoured cuddly toy (mine not his!) had to be binned and a bed valance put in the wash. I mean who ever has to wash those! I was also using a dustpan to shovel sick – yes a dustpan! We then embarked on a trip to the drop-in clinic to be then sent to Children’s A&E with suspected appendicitis. Of course everyone was utterly brilliant. We never saw another patient and we felt perfectly safe. Thankfully we were eventually sent home for further monitoring and my son gradually got better over the next few days.

After a couple of weeks of falling out with my guitar and feeling a general sense of apathy with all the promises I’d made on entering lockdown, I finally picked it up again. I’m happy to tell you that I can now restring a guitar…thanks to YouTube of course. After a few days of utter frustration I made a break through this week. My friends on YouTube were not helping. They could all do things with their fingers that I couldn’t and I was about ready to give up until I spoke to an old school friend who is a great musician. She told me not to worry too much about getting it to sound exactly right. Vaguely right is ok whilst you are learning apparently so I finally feel like I’m making progress and so trying to stick with it. I watched a great interview though with the legendary novelist Marian Keyes on the TV and she said you must not feel bad if you are not achieving anything at the moment. She is so right. I try and remember that when I’m slobbering on the couch watching romcoms in the middle of the afternoon. It’s very helpful. 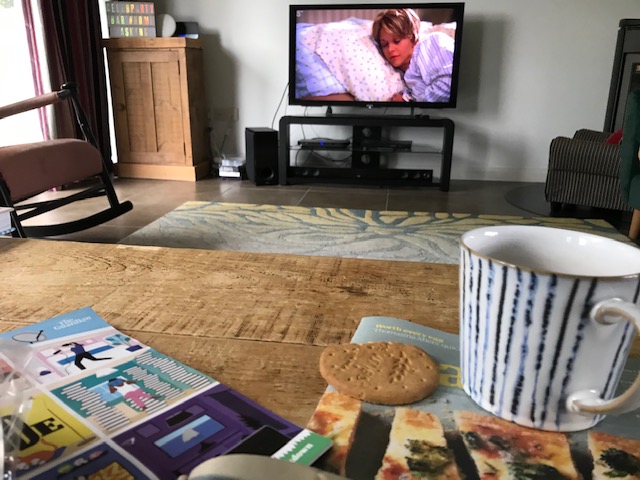 So it’s Thursday and I need to clean. Wednesday is normally cleaning day but something happened that stopped me from doing that and I have no idea what it was. I have no idea really what is happening from one day to the next. However I did do some cleaning  on Monday. I wanted to move around the layout in the living room. Try and introduce some sort of change into our static lives but my plan would have risked cutting off our Sky TV  and that was a risk I was unwilling to take. However it meant I had to hoover under everything I had moved before it went back and and I even hoovered the sofa…..that made me a bit tearful to be honest. Sad tearful. Depressed tearful. But this morning  I put on the news and there was Captain Tom Moore celebrating his 100th birthday having raised nearly £30m for the NHS by lapping his garden. I had a good cry. An opportunity to let some emotion out when we are all trying to keep it all in. For the sake of the children. For the sake of anyone we are in lockdown with. So I would like to express my deepest congratulations to Captain Tom Moore and my thanks for letting the emotional ones amongst all have a good cry this morning. I feel a lot better.